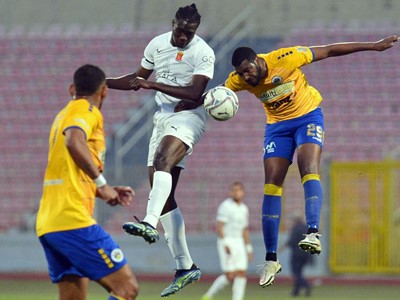 Floriana beat Hibernians yesterday evening at the National Stadium to reach the Final of the 2021/22 Izibet FA Trophy, shattering the Paolite’s dream to win the double on their 100th anniversary. The Malta champions played below par and could not break Floriana’s resistance, even after the Greens ended up with ten players after just half an hour play.

Jurgen Degabriele had a glorious opportunity to open the score for the Peacocks after just five minutes but Georgi Kitanov turned his effort into a corner. Barely two minutes later, Kemar Reid came close to break the deadlock for Floriana but blasted his close-range effort high over the crossbar. On 27 minutes, it was Floriana who opened the score thanks to a wonderful individual action from Reid, who beat his direct marker in the box and goalkeeper Matthew Calleja-Cremona with an accurate grounder. In the mayhem that followed, Reid received his second yellow card for excessive celebrations, leaving his team with an uphill task for the remaining hour. On 40 minutes, Jose Arias could have doubled the score in favour of Floriana but Calleja-Cremona blocked his close-range effort. Two minutes later on the other side, Degabriele should have done better but his effort was somehow fumbled into a corner. Three minutes into stoppage time, Floriana doubled when Jan Busuttil lobbed brilliantly over Calleja-Cremona to send his team with a two-goal advantage into the dressing rooms.

As expected, Hibernians dominated the second half against ten Floriana players, but without setting any houses on fire. It was Floriana who created some good chances themselves, mainly through substitute Ryan Camenzuli who had a few good opportunities but failed to materialise. Hibernians’ first real chance in the second half arrived on 76 minutes when Jake Grech’s grounder was blocked by Kitanov. The Bulgarian custodian was called back into action six minutes later, saving an Alvaro Muniz free-kick in style. With three minutes regular time left on the clock, Hibernians finally pulled one back when substitute Wilfred Domoraud’s header had the best of Kitanov, rounding off a precise cross by Muniz. One minute later, a Degabriele attempt from the edge of the area ended up on the roof of the net. It was however Floriana who will progress to the Final, their first one since 2017.

On Tuesday night, Valletta reached the Final of the Izibet FA Trophy by beating Santa Lucia by a single goal, scored deep into the second half. Both teams met for the second time in the space of five days and like in their league match, Valletta came out victors. It was a hard blow for Santa Lucia who, despite being relegated to the Challenge League, shared the exchanges with Valletta for long stretches.

The opening half hour did not bring much firework, with Valletta coming close with a Mario Fontanello first-timer on twenty minutes. Vito Plut had perhaps the best opportunity to score in the first half on 36 minutes, when Gianmarco Conti headed a long ball from Lorenzo Fonseco into the path of Plut, who found Alessandro Guarnone on his way, who blocked his close-range effort. Five minutes later, an Andre Prates header from a Jamie Zerafa corner was saved in style by Guarnone.

On 52 minutes, veteran goalkeeper Justin Haber blocked a close-range attempt from Promise Akinpelu. Just after the hour however, Valletta scored the goal what proved to be the winner, when Akinpelu was in the right place to finish off an inch perfect cross by Kevin Tulimieri from the left flank, beating Haber from close-range. Santa Lucia gave it all to get an equaliser and came closest one minute into stoppage time when substitute Alan Silva brought the best out of Guarnone, with his rebound sailing inches over the crossbar.

It is however Valletta who will try to save their season on Sunday, setting up a mouth-watering derby Final with Floriana, appearing in their 29th FA Trophy Final since it’s interception in 1935.

The Final will be played on Sunday at the National Stadium with a 17h00 kick off time.