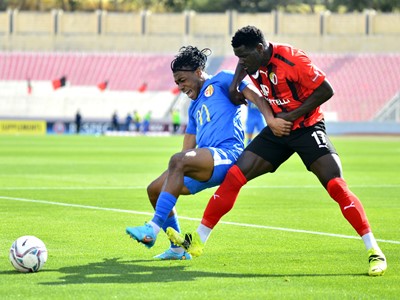 10 – Valletta’s win over Santa Lucia last Friday was their 10th Premier Division win of the season. This is their lowest number of wins since 2005-2006 when they also recorded ten wins (in 28 MPL games), not considering the previous two seasons when the competitions was not played to an end.

20 – Franklin Sasere’s solitary goal against Birkirkara last Saturday was the 20th goal for the Hamrun Spartans striker in the Premier Division.

45 – Mosta midfielder Clayton Failla, was shown the 45th red card of the season in the 3-2 defeat against Sirens. He was sent off by match official Fyodor Zammit just after the match ended. It was also the last red card of the campaign.

50 – Sirens’ third goal in the 3-2 win over Mosta scored by Carlos Flores, was the 50th the Blues conceded this season.

80 – Yuri de Jesus Messias netted the 80th goal of the Second Phase. Gzira United’s Brazilian forward scored the winning goal for the Maroons in the 2-1 victory against Hibernians. It was also the last goal netted of the 2021/22 BOV Premier Division.

100 – In the match against Hibernians, Yuri de Jesus Messias also became the 100th foreign player to win the ‘man of the match’ accolade.

150 – Young Floriana forward Mattia Veselji became the 150th scorer of the campaign. He doubled the advantage for the Greens in their 2-1 win over Gudja United.