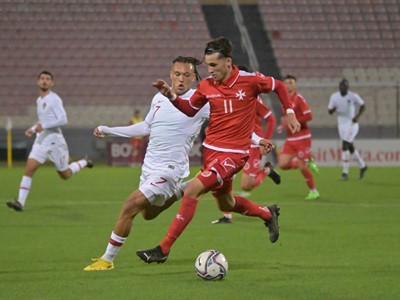 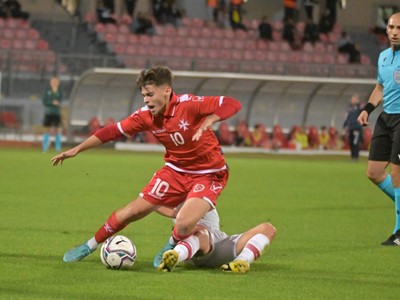 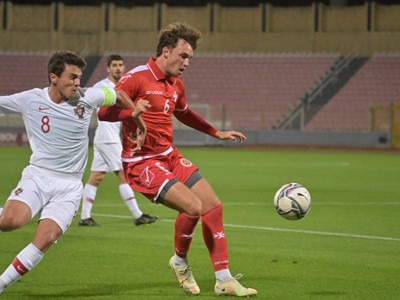 The Maltese Under-19 side kicked off their tournament commitments with a narrow defeat against Portugal, in a match largely dominated by the visitors. After a tough first half, Malta gave a good account of themselves after the break, finding their feet slowly and building up some promising attacks throughout the half.

The Under-19 preparatory Tournament is being held with an eye on the UEFA Under-19 Championships, to be hosted by Malta in July next year, and can be seen as a rehearsal on organisation as well to give the local Under-19 side a chance against some of the big guns in Europe at this level. Apart from Portugal, who have been given a bye for the first round of the Championship due to their UEFA top seeding in this category, also Germany and Poland take part in this tournament. They met earlier yesterday with the Germans beating the Polish 3-0 at the MFA Training Grounds.

As expected, the classy visitors dominated proceedings during the first half. They took the lead on 21 minutes when the referee awarded a penalty for a handsball incident in the Malta box, involving Herculano Nabian and captain Jake Micallef. Hugo Felix made no mistake from the spot, sending Karl Sargent the wrong way. Three minutes later, Malta defender Jake Vassallo made a positional error on the edge of the box, allowing Nabian to chest down a long ball, beating Sargent with a grounder. Malta came close for the first time on 37 minutes when a Lucas Caruana header from a free-kick just missed target. Three minutes later, Sargent did well to block a close-range Goncalo Esteves attempt.

In the first 15 minutes of the second half, Portugal created several other goalscoring opportunities, with attempts by Hugo Felix, Estevan and Diogo Monteiro, but none were on target. On 71 minutes on the side of Malta, Benjamin Hili sent substitute Basil Tuma through, but the speedy debutant could not control the ball and wasted the opportunity with the Portuguese defence clearing the danger. The chance arrived during a period that Malta saw much more of the ball, creating a few attacks with a neat built-up.

In the last fifteen minutes of the match, Sargent distinguished himself with a string of great saves from Portuguese goal attempts. On 87 minutes, Malta deserevdly pulled one back thanks to Tuma who took full advantage of some hesitation by Portugal centre-back Diogo Monteiro, beating the onstorming Joao Carvalho with a precise lob. In the attack what followed, Hugo Felix kicked against the crossbar. One minute into stoppage time, Matteo Gambin’s cross what headed by Tuma but the attempt missed direction. Substitute Yanis Da Rocha hit the post for Portugal, which was the last goalscoring opportunity of the match in an action packed last ten minutes.

Malta will now meet Germany in the Gozo Stadium on Saturday, kick off 12h30, while Portugal will play Poland at the National Stadium with a kick off time of 18h. The preparatory tournament comes to a close on Tuesday.