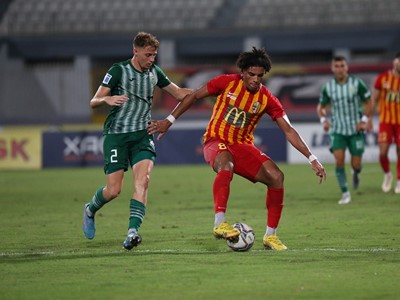 Santa Lucia v Zebbug Rangers – 20.01.2023 (20h30) – Centenary Stadium
After a one week FA Trophy break, the 2022/23 BOV Premier Division resumes tonight with the basement clash between Santa Lucia and Zebbug Rangers. Only two points separate the sides who will vying for the all three points in this direct relegation encounter. A quick look at the table will reveal that, realistically seen, both teams hope to avoid the automatic relegation spot, thereby rely their survival hopes on the Play Off that follows.
The saints will be galvanized by their magnificent result and performance they managed in their Trophy win over holders Floriana, whereas Zebbug Rangers' dismal run persisted with an early elimination after defeat against Challenge League outfit Swieqi United, that ensued six defeats in their previous seven league matches.
The Lucians are expected to start with Rodolfo Soares and new Ukrainian recruit Yevgeniy Terzi, who both already made their club debut last week against Floriana in the Trophy. On the contrary, Zebbug have to do without suspended centre back Henrique Motta.
The first round match was won 2-0 by Zebbug Rangers.

Hibernians v Mosta – 21.02.2023 (14h00) – Tony Bezzina Stadium
Hibernians' hopes of retaining the title won last season have all but ended with two straight defeats in their last two league matches, wherein failing indeed to find the net once against Valletta and Hamrun Spartans.
Their 3-1 Trophy win over Challenge League side Zurrieq was expected by the Paolites who nonetheless will have to face the league reality once again with Mosta their opponents on Saturday.
The Blues have enjoyed so far a formidable campaign to their standards, their recent run is also defined as impeccable with five wins in their last six matches including the thumping result in a 3-0 win over Melita in their cup duties last weekend.
Bjorn Kristensen is suspended for Hibernians, who might introduce the returning Marko Jovicic between the sticks, with regular goalkeeper Ibrahim Kone struggling with fitness lately. Coaches Joseph Grech and Mario Muscat must have done some good thinking how to replace Christ Ememe, Tyrone Farrugia and Zachary Brincat, all suspended for this match. It is expected that lanky centre-forward Ferebory Dore will make his debut for the Blues, as the former Congo-Brazzaville international (35 caps) joined Mosta from French national league side USM Saran.
The first round match was won emphatically 5-0 by Hibernians, stretching their unbeaten run against Mosta to 17 consecutive matches in all competitions (W14, D3). The last Mosta win already dates back from 4 October 2015 (4-1).

Floriana v Birkirkara – 21.02.2023 (15h00) – National Stadium (TVMSport+)
Arguably the stand out fixture this weekend in Match Day 16 as both sides need valuable points to keep alive their challenge for a European spot.
Birkirkara are currently third in the standings on 28 points, in positive mood again ensuing their resounding wins in recent outings over Zebbug Rangers and Nadur Youngsters. The recent capture of Swiss midfielder Matteo Fedele from Hamrun Spartans will surely charge this team forward in their hunt for a European spot come end of the season.
For the Greens the misery of a disappointing season continued with their early Trophy exit at the expense of resilient Santa Lucia. They are however only three points behind the Stripes, therefore a win would significantly change the mood in the dressing room as they will also be vying for the European qualification pay cheque come end of the season. With the Valletta derby coming up next weekend, a positive result against Birkirkara would be most welcome.
Both teams have no suspension worries. The first round match was target for Birkirkara with a 1-0 victory thanks to a goal by Kevin Tulimieri. It will be the 159th meeting between the two in history in all competitions, with Floriana having won 65, against Birkirkara 55. Looking at the last ten meetings however, both teams recorded four wins each.

Gudja United v Balzan – 21.01.2023 (16h15) – Tony Bezzina Stadium
The Gudja against Balzan match is a mid-table clash that have all the ingredients to be an entertaining encounter, with both sides chasing their chances for a European spot. On top of that, these are two sides who are most probably overwhelmed by their progress this season, particularly Balzan who this time last season were sweating in their fight against the drop. Four wins in their last five outings is a positive return for side led by coach Oliver Spiteri.
On their side Gudja are also on a strong run, in their last five matches they have only lost once against runaway leaders Ħamrun Spartans. Their thumping cup win at the weekend over neighbours Tarxien will surely spur this Gudja side to maintain consistency in their hunt for a strong ending to this fascinating season they have endured.
For Gudja, defender Neil Micallef will be missing, serving a suspension. However, Shaisen Attard, on loan from Hamrun, should be included in the match squad, as well goalkeeper James Pisani, two new faces which will give coach Andrea Agostinelli some more choices. Nikola Braunovic is suspended for Balzan. Gudja beat Balzan 1-0 in the first round thanks to a Johann Bezzina strike.
It will be the 37th encounter in history between the two, with the first one already being played during season 1952/53 in the 3rd Division. The six games played in the Premier Division show perfect balance with 3 wins each.


Sirens v Valletta – 22.01.2023 (11h30) – Tony Bezzina Stadium
Only four points separate Sirens and Valletta in this Sunday morning kick off, with both teams ranked midtable, that could perhaps suit Sirens in sync with their season ambitions.
For Valletta however, the three points in the 90 minutes ahead are a must, also bearing in mind their failure to secure maximum points in their last league encounter against rock bottom side Pieta’ Hotspurs, also knowing the 1st round match ended in a goalless draw. The recent return to the team of forward Federico Falcone will surely help the side be more clinical up front in their strive to convert good performances into winnable results, while also Rowen Muscat looks to be back to full fitness, two important players in Thane Micallef’s bid for a top four finish.
Both teams have no suspended players. During the eight previous official meetings at senior level, Sirens only managed to beat Valletta once with a 2-1 victory last season on 6 February 2022. Valletta won four and three matches ended in a draw.

Marsaxlokk v Gzira United – 22.01.2023 (14h00) – National Stadium (TVMSport+)
The Maroons have a good record this campaign against the so-called lower sides. Darren Abdilla’s side will be vying to repeat their recent league wins over Zebbug Rangers and Santa Lucia in the 90 minutes ahead, against a Marsaxlokk side who of lately have been struggling in chalking up favourable results in their aspirations to distance themselves from the relegation zone.
However, the comprehensive cup result over neighbours Zejtun Corinthians in the Trophy last weekend has probably improved some confidence and the Southseasiders will surely give Gzira a good run for their money in the 90 minutes ahead on Sunday. However, coach Pablo Doffo must do without Daniel Agius and Edafeh Uzeh, both suspended. But new signing Ryan Scicluna already made some minutes last weekend and is a welcome addition in an already balanced squad.
Abdilla has new signing Lucas Ribeiro (ex-Marsa) available, but with a full squad to his proposal, the Brazilian striker is likely to start on the bench. Gzira and Marsaxlokk kept each other on a goalless draw in the 1st round.

Pieta’ Hotspurs v Hamrun Spartans – 22.01.2023 (16h15) – National Stadium
It’s top against bottom to end up proceedings at the weekend, as Spartans will be seeking three more valuable points to edge closer to their ninth league title. However, their performances against the lower sides have left much to be desired after their defeat to Zebbug Rangers and their recent cup outcome only edging Ghajnsielem in extra time.
Pieta’ have recently dug deep in the transfer market with few signings in their attempt for a final shout in what’s left in this league, participation in the Promotion/Relegation Play-Off might still save their season. The papers of new signing Davi Miranda Rodrigues ‘Marinho’ have arrived at the MFA and therefore the left winger is available for selection on Sunday.
Hamrun have Emerson Marcelina missing through suspension, one of their best performers so far this season. The Spartans beat the Hotspurs 2-0 in the 1st round with goals by Jonny do Nascimento and Elvis Mashike.