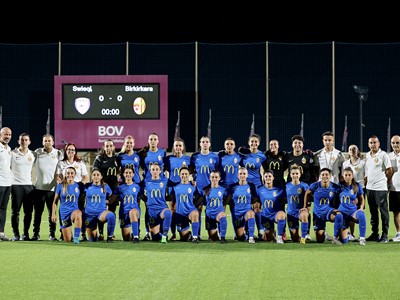 Defending champions Birkirkara have continued to establish their names in the history of the Maltese women’s game after setting a new league unbeaten record.

Their 1-1 draw against Swieqi United on the opening day of the new-look Assikura Women’s League has extended the Stripes’ run to 70 games. Alishia Sultana scored the game’s first goal, breaking the deadlock in favour of the Stripes in the opening 45 minutes.

However, Swieqi managed to level terms with the current league holders with a brilliant strike by the evergreen Dorianne Theuma who has cemented her first position atop the all-time leading scores in the domestic competitions with her 400th goal.

Last season, Theuma was named the MFA Women’s Player of the Year for a record eighth time.

In this game, both teams handed debuts to their new signings with Marta Grosso and Gaia Milan making their first appearances for the Stripes in the league.

On the other hand, Swieqi – under newly-appointed Dutch coach Judith Kuipers, deployed Ghana internationals Cynthia Konlan between the stick and Rebecca Atinga in the backline. Moreover, American player Tatiana Dabney was also in the starting formation having joined from the Portuguese league. Jasmine Vella Turner, who swapped Mġarr United for Swieqi, was given the nod in the midfield as well.

Mġarr, who last season placed third, opened their new season with a 7-0 win over San Ġwann – in their second year in this league. The Greens, led by coach Michael Mangion, were inspired by captain Brenda Borg who resumed where she had left off last season with her 19 goals as she grabbed four from the seven scored.

The other three were netted by Yulya Carella, one of the club’s new additions alongside Kathryn Ellul, Kelly Agius Pace and Rebecca D’Agostino who all played against San Ġwann.

San Ġwann, on their part, also had some of their signings playing including youngster Nicole Camenzuli who joined the club from Mġarr.

In the other game of the week, Hibernians marked their return to senior football with a 7-0 win over Mtarfa, who are participating for the third straight year.

Under the guidance of coach Keith Gouder, Hibernians drew first blood in the first half through Rodianne Zerafa.

The Paolites had to wait to ensure themselves of the three points with goals from captain Martina Borg, Alexis Espitia and a brace from Aleksandra Georgieva and Yolande Attard each.

Borg was making her return to the local game after five years in Italy, together with Nicole Sciberras who has also joined the 12-time women’s league champions.

Espitia, one of the team’s scorers, joined Hibernians after moving from Swieqi United.

On the other hand, Mtarfa were led by Simon Spiteri and had some of their signings playing as well including young Maltese internationals Jeanelle Falzon and Thea Ida Scicluna.

Click here to watch the goals from Swieqi United vs Birkirkara and San Ġwann vs Mġarr United.